Origin The Mathematical Association of Thailand Contest 2007, High School Level, Problem 35 (write down the answer only). Note that this is a loose translation.

Eighty students with IDs 1, 2, ..., 80 take turns in the order of increasing ID to write numbers on a blackboard. During the first round, each student writes down her own ID. During the subsequent rounds, each student computes the arithmetic mean of the numbers on the board, and then replaces the number she wrote in the previous round with the computed result. As they perform this process, all numbers on the board converge to the same constant. Find that constant.

After the contest, I went to China with my family during the New Year's holiday. The Chinese tour we went with imposed mandatory visits to local factories (sometimes called "scams") as usual. One of them is a tea factory. 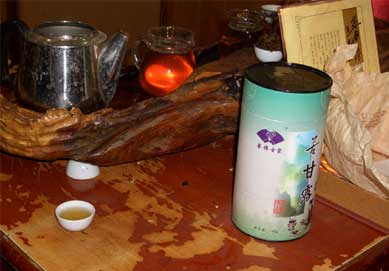 The staff prepared the following tools for making tea: 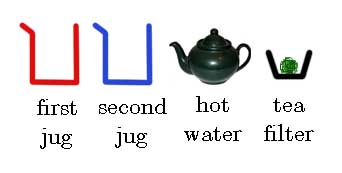 First, the staff made a jug of tea by pouring hot water through the tea filter. To double its concentration, she poured the tea through the filter once more.

Suppose each jug holds 2 units of tea. The numbers outside parentheses are concentration, while the numbers inside are quantities.

Next, the staff made less concentrated tea in the first jug, and then pour away half of it (= 1 unit); this way, the concentration was preserved. 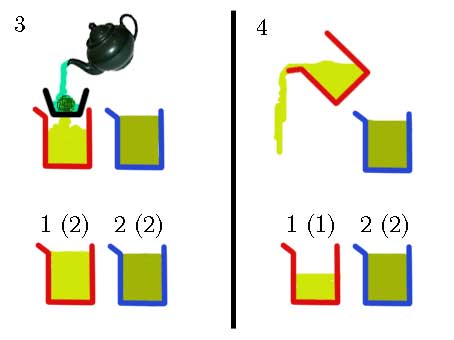 Then the staff mixed the tea by alternatingly pouring 1 unit of tea from one jug into the other. 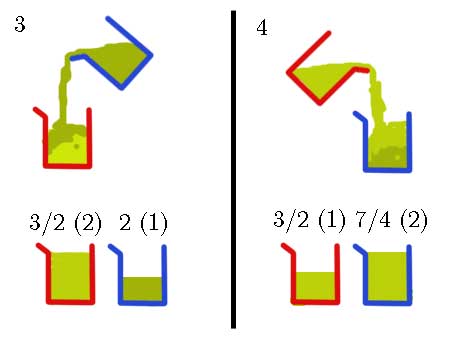 Now suppose she continued mixing until the two jugs have roughly the same concentration $x$. This is the classic mixture problem: the total mass (= volume × concentration) must remain constant. So we get $$1\times 1 + 2\times 2 = (1+2)\times x$$ which makes $x = 5/3$.

I wrote this explanation in my (now defunct) blog in 2008. The illustrations above were salvaged from my old CD-R, but the original text was lost.